Former Holy Cross women’s basketball coach Bill Gibbons is the winningest coach in program history and very accomplished according to his bio on Holy Cross’ website.

Bill Gibbons is in his 34th season at the helm of the Holy Cross women’s basketball program in 2018-19, and his 38th season as part of the Holy Cross athletic department. He is the winningest coach in the history of the program, leading the Crusaders to an overall mark of 602-401 through the past 33 years. On February 24, 2018, Gibbons earned his 600th victory as Holy Cross’ head coach, becoming the 21st active Division I head coach to reach the milestone. He is also just the seventh active coach to record 600 wins with one D-I program.

But six years ago Holy Cross dragged him through the mud when a player, who mostly rode the bench, baselessly accused him of physical and emotional abuse because he yelled at her during practice and games. 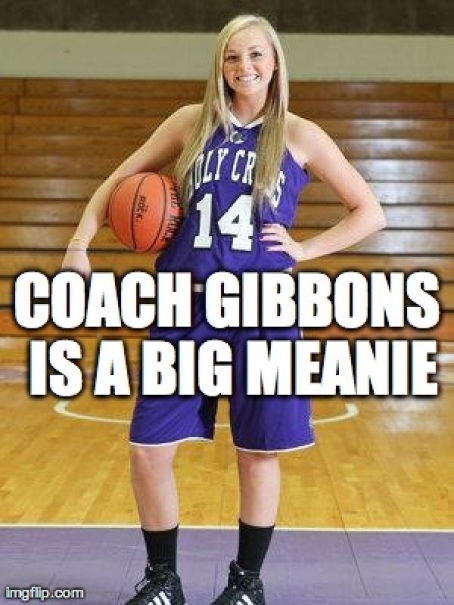 Just to be clear, it’s normal for players to be yelled at by their coaches. It build character, forces them to improve, and for Gibbons it got results for years. For that reason many of his former and current players came forward to defend him, but he had to step aside while the school investigated her ridiculous claims anyway. The next year he was reinstated after it was determined that he did nothing wrong to the player (Ashley Cooper) who had already transferred to a much worse basketball school where she could actually get off the bench.

You’d think that after dragging their coach through the mud like that because one benchwarmer got her feelings hurt over words would’ve taught Holy Cross a lesson. But apparently it hasn’t, because Coach Gibbons was fired in February over more nonsense, and recently filed a lawsuit against Holy Cross for $750,000 in damages. Here’s the key points:

This story is everything that is wrong with society today. Let’s start with the fact that she is the assistant and he was her boss. The fact that she subbed in a player without his approval is bad enough. But publicly undermining his authority by loudly saying “wow, wow, wow, wow, wow,” in front of players, brings unprofessional behavior to new heights. Gibbons was 100% in the right to call her out for insubordination and address it afterwards. That’s why the the AD told him that upon further review.

Yet this entitled narcissist gets to win because she went behind his back and cried to human resources that this was a “threat.” She’s right – it was  threat to fire her if she kept committing fireable offenses. Welcome to every job ever.

But since no action was initially taken she continued to coach for him and pretend things were fine while going behind his back and complaining to human resources. She had the audacity to complain that the coach wasn’t listening to her recommendations, which of course he’s under no obligation to do because he’s her boss. He’s also been winning games since before she was born, so she should probably shut up and listen instead of telling the winningest coach in school history how to win basketball games.

And when even that didn’t work she decided to play the card that millenials like her always play when they are devoid of facts and can’t seem to get their way – the race card. It doesn’t matter that not a single black player, past or present, complained that he was racist. The fact of the matter is that Holy Cross’ new AD is a gutless puke who takes the word of a race-baiting, insubordinate coach over the successful head coach who’s been doing the job for 34 years.

This is a woman who follows and retweets Shaun King.

Shaun King, AKA Martin Luther Cream, AKA Talcum X, is a well known grifter who might not actually be black. He frequently lies about incidents like the Sandra Bland case in order to raise money and enrich himself. Don’t take my word for it, take this column written yesterday by Black Lives Matter leader Deray McKesson, in which he says the exact same thing. Anyone who has ever retweeted Talcum X except for the purposes of mocking him for being a complete fraud, is someone who is just as full of crap as he is.

Oh, and the whole “we’re firing Gibbons because we have high standards” line was truly laughable. This is Holy Cross. They play in arguably the worst conference (Patriot League) in the NCAA. This isn’t UConn. They’re not going to fire one of the winningest coaches in NCAA history because they’ve been a mediocre team for a few years.

Worst of all is the fact that Holy Cross seems to have done this as a PR stunt to cover up their own PR disaster with the way they handled allegations of sexual assault on campus. They threw this dedicated employee under the bus to take the heat off themselves.

Nothing ironic about this either.

Also, shout out to a lot of the parents that are no longer doing THE MOST during games ie coaching/yelling/refereeing/complaining!
Thank you.
WE APPRECIATE YOU! 😊. #ThisGameIsFun #StopStressing pic.twitter.com/pkbB2ygZ7n

She doesn’t like it when parents complain or overstep their boundaries with the coaches, but she has no problem complaining to HR after overstepping her boundaries as an Assistant Coach in order to get the head coach fired.  Makes sense.

I hope Bill Gibbons takes Holy Cross to the cleaners, and I’m surprised he’s only suing for $750,000, which means nothing to them. Holy Cross pays no taxes to the City of Worcester, they rake in millions of dollars a year in profit, and they send kids out into the world with mountains of debt and a degree that can’t get them a good job. They are a disgrace and a joke and deserve to go bankrupt.

Hello Turtle Riders. As you know if you follow Turtleboy we are constantly getting censored and banned by Facebook for what are clearly not violations of their terms of service. Twitter has done the same, and trolls mass reported our blog to Google AdSense thousands of times, leading to demonitization. We can get by and survive, but we could really use your help. Please consider donating by hitting the PayPal button above if you’d like support free speech and what we do in the face of Silicon Valley censorship. Or just buy our award winning book about the dangers of censorship and rise of Turtleboy:

Providence Woman Unsure Of Who To Call When She Witnesses Women Of Color Assaulting Each Other In Street, Fears Being Racist If She Calls Police, Asks Facebook For Help

Shiva Ayyadurai Is Coming On The Live Show Tomorrow Night To Try To Convince Me That 100,000 Ballots For Him Were Destroyed And Has Launched A Class Action Lawsuit

“I Am Turtleboy” Now On Sale On Amazon, Buy Your’s Today

Support Turtleboy and TBdailynews with a featured product purchase!